You are here: Home / Odor Removal / Removing Odors From Furniture

If you’ve had your furniture for any length of time, chances are that odors have begun to settle into the fibers of it. This is especially true if you have pets or small children who tend to spill liquids and other items on your furniture.

Although there are some at-home methods for removing odors from furniture, they often aren’t quite as effective as hiring a professional odor removal service to do the job for you. Most at-home solutions only mask the odors for a short period of time, after which they return. Instead of repeating this viscous cycle of at-home cleaning, it’s better to go about removing odors from furniture permanently the first time.

Of course, some people simply go out and purchase new furniture when theirs becomes laden with heavy odors, but purchasing brand new furniture is much more expensive than simply investing in a professional cleaning service that’s experienced with removing odors from furniture. Plus, if you are particularly fond your furniture, having a professional cleaning service remove the odors for you can restore your favored pieces to their previous glory so that they feel and smell brand new again, which makes it so that you can enjoy them for years to come.

Perhaps the most advantageous aspect about investing in professional cleaning services is that the technicians who work for such companies are specially trained in removing stubborn, unpleasant odors that homeowners often can’t remove themselves with common over-the-counter cleansing agents. Not only do technicians have the skills and training to appropriately locate and eliminate the source of the foulest of odors, but they also have the best tools and resources at their disposal to blast away stubborn stains and smells. For instance, every type of fabric and fiber has its own physical properties that affect the type of cleansing agent that can successfully be used on it rid it of odors. The technicians who work for professional cleaning services have the knowledge to discern what type of fabric they’re dealing with as well as the type of cleansing agent that should be used on it. Additionally, after treating the furniture, they also have products that can permanently seal the furniture and trap any lingering odors that remain.

If you’re dealing with foul odors on your furniture, you might want to spare yourself the hassle and frustration of buying new furniture or attempting to get rid of the smell on your own only to have it keep coming back. Instead, go ahead and invest in a professional odor removal service to get the job over and done with once and for all. 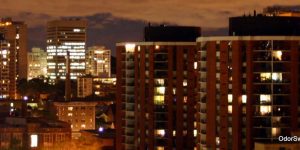